What Are the H.O.P.E and HELP Acts? 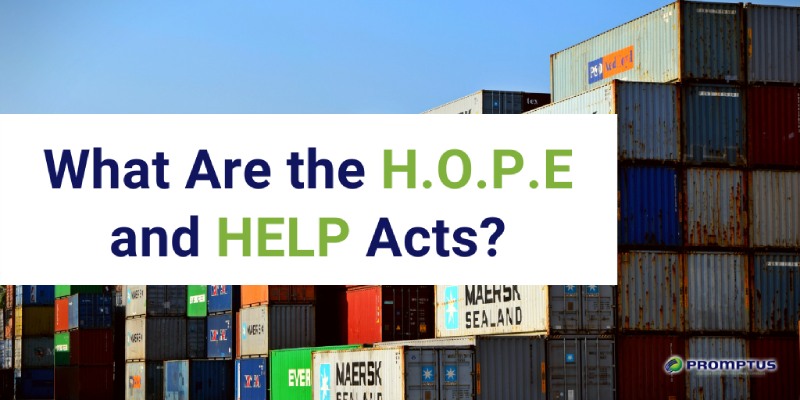 Understanding Trade Between the United States and Haiti

The United States has a long history of facilitating the trade with many of its neighboring countries, such as those in the Americas and the Caribbean through the implementation of trade agreements that result beneficial for all countries involved by promoting stability in their economies.

Countries like Haiti, which are very close to the US, become interesting trading partners thanks to their accessibility. In 2006, partially in response to concerns arising with Haiti’s apparel parity issues, the United States Congress implemented the Haitian Hemispheric Opportunity through Partnership Encouragement (more commonly known as just HOPE) Act. HOPE was enacted alongside the General System of Preferences (GSP), the Caribbean Basin Economic Recovery Act (CBERA), and the Caribbean Basin Trade Partnership Act (CBTPA). However, the first iteration of this partnership was mostly unsuccessful.

Two years later, in 2008, Congress passed an extended and ungraded copy of the bill, known as HOPE II. This version included an increase in the Tariff Preference Level (TPL) for specific woven and knit productions; as well as co-production with the Dominican Republic, which shares the island of Hispaniola with Haiti; and the inclusion of luggage, sleepwear, and headgear in eligible trade items.

The intention of HOPE II was to establish new rules of origin that would help make Haiti eligible for better trade benefits regarding apparel imports and enhance sourcing flexibility for producers.

This helped to modify the existing trade preference programs operating under HOPE and further develop the benefits of the act. An adjacent act, HELP also helps to provide duty-free treatment to additional textile and apparel products coming from Haiti. These preferences are all currently valid and are set to expire on September 30, 2025.

About the HELP and HOPE Acts

The Haitian Economic Lift Program (HELP) is designed to promote economic growth in this developing country and extends advantageous duty-free treatment to additional textile and apparel products from Haiti. The HELP act works alongside the HOPE act and helps to extend duty-free shipping to the US market, which includes around 1,500 products (making for a total of 5,000 duty-free products eligible under the GSP).

Trade preferences under the HOPE and HELP acts are specific to Haiti since they are carefully created and conditioned around two major parties: the Haitian government and the producers individually meeting certain core labor standards. These producers are expected to participate in a Technical Assistance Improvement and Compliance Needs Assessment and Remediation program (TAICNAR) as well as comply with the predetermined and internationally agreed-upon core labor standards.

The Generalized System of Preferences (GSP)

To understand the HOPE and HELP acts, we must also discuss the GSP. The US Generalized System of Preferences, or simply just GSP, is a program that is intended to promote economic growth in developing nations. It helps to provide duty-free treatment to various designated beneficiary countries and is currently up to 5,000 eligible products under duty-free allowance (as mentioned above). The lists contain a combination of goods including agriculture, fishery, industrial, and most dutiable manufactured and semi-manufactured products.

Some of the preferences are set to expire at a certain time, so be sure to read up on these programs, available at the US Department of Commerce Office of Textiles and Apparel!

The very important component for the execution of these acts is Free Trade Zones. On August 2, 2002, a law on free trade zones (FTZ) was implemented to set out acceptable conditions for creating, operating, and managing FTZs. There are also exemption and incentive regimes that are applicable to ventures made in these zones. As defined by the law, a free trade zone is a geographical area that operates under the regime of customs duties that controls taxation, immigration, capital investment, and foreign trade. It is also an area where domestic and foreign investors can provide services including importing, storing, producing, exporting, and re-exporting goods. These FTZs are either a private or a joint venture that is involved with state or private investors.

You May Also Like: “The Practical Benefits of a Foreign Trade Zone”

Previously, only two free trade zones were granted status in 2003, with only one being operational in northern Haiti. However, in January 2019, a new FTZ was declared in Ganthier Balan.

Haiti also has issued at least nine Free Trade Zone licenses, which are as follows:

The Free Zones National Council (CNZF) is an inter-ministerial commission, which is comprised of representatives from the public and private sectors. They are directly responsible for various regulations and rules regarding the free trade zones in Haiti.

There is also the Free Zone Directorate, an entity that exists within the Ministry of Commerce and Industry. They act as the CNZF’s Technical Secretariat in order to uphold and ensure the implementation of decisions taken by the CNZF.

In addition, the responsibilities of the Free Zone Directorate include:

Crunching the Numbers (as per the ITA)

The International Trade Administration (ITA) is a United States government agency within the Department of Commerce that promotes and oversees the export of nonagricultural US goods and services. According to their numbers, the United States is one of Haiti’s top trading partner. Based on data from 2018, the US imported over $991 million in goods from Haiti (which was up almost 8% from the previous year).

Of those 2018 imports, $926 million were generated from apparel goods manufactured in the Haitian garment sector via the HOPE and HELP acts and the CBTPA legislation! In addition to the apparel assembly sector; telecommunications and transport fields also attract a substantial number of investors. Exports of US goods to Haiti are also worth noting, with amounts totaling up to $1.4 billion in 2018.

Considering Expanding Your US Business Market?

Some reasons to expand your export or import business into Haiti.

If you need assistance branching into the Haitian market for US exports and for goods being imported into the US from Haiti, we can help! Located in Miami, we have plenty of experience coordinating shipments and transport to Haiti, whether it is via ocean transport or air freight, call today for a quote.