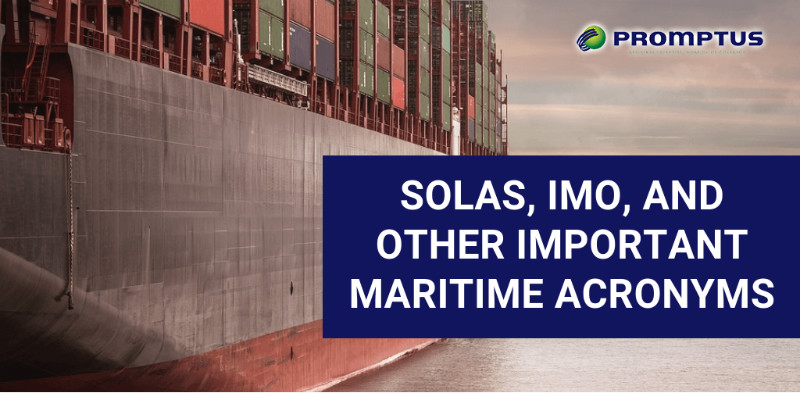 Learn About the Organizations Improving Safety At Sea

When it comes to regulating and governing the thousands of cargo ships that are traveling the world’s waterways on a daily basis it can’t be the responsibility of anyone government but of all governments interested in a well-functioning mechanism to secure standardization, consistency, and proper guidelines to protect the shipping industry and most importantly the lives of those of at sea.

Of that thought, the IMO has created treaties, committees, and an organization formed over the years with the dedicated responsibility of ensuring the safety of those at sea.

The SOLAS Convention (also known as the International Convention for the Safety of Life at Sea), is regarded as one of the most important treaties to be signed in to maritime law for the protection of merchant ships. The very first iteration of the SOLAS treaty was adopted following the Titanic tragedy, in 1914. The version used today, sometimes stylized as SOLAS 74, has seen many amendments and changes over the years, and as new provisions are introduced, new addendums are made.

Operating under the IMO, or the International Maritime Organization, SOLAS determines the minimum standards of safety that must be followed for the construction, maintenance, and operation of merchant ships. These regulations are enforced by the various Flag States, under which certain ships are assigned. These Flag States must ensure that their merchant’s vessels are compliant with the minimum required standards to ensure the safety of the boat, its crew, and any passengers. Certificates are distributed via the Convention to act as proof that the necessary authorities have inspected the ship and deemed it acceptable for transport.

How Does the IMO Work?

The development of international regulations has proven to be the best way to manage a large number of maritime vessels transporting both goods and people across the seas. Starting sometime in the 1900s, various countries around the world began drawing up treaties to help introduce better maritime practices and ensure safety for everyone involved. Shortly after the induction of the United Nations, a conference was held in Geneva, Switzerland in 1948.

The first version of IMO was then born, under the name Inter-Governmental Maritime Consultative Organization (IMCO). In 1958, the UN adopted the IMO convention we know today (the name changes finally came in 1982) and the organization began meeting the following year. By this time, treaties like SOLAS were already in place, but the IMO set out to update them to better reflect the changes of the decade. That was their first order of business, and SOLAS, 1960, was introduced.

Over the next few years following the introductions of SOLAS, the IMO set out to establish a number of standards, most of which remain active today. To ensure all parties followed these standards, certain committees and sub-committees were formed with specific responsibilities. These committees are responsible for policy-making, for example. Their respective titles describe each Committee’s area of focus, as follows:

The seven consequent Sub-Committees help to support the efforts of these main Committees, and they act under the direct command of the MSC and MEPC. Like the other Committees, their work is designated by their respective titles.

Maritime safety is about much more than ensuring the security of cargo moving overseas. It is about ensuring proper construction of merchant transport vessels, helping to reduce pollution, crime, and even facilitating traffic on the seas. Their slogan, “Safe, secure, and efficient shipping on clean oceans,” helps to highlight the IMO’s goals. The sub-committees directed by the Maritime Safety Committee (MSC) and the Marine Environment Protection Committee (MEPC) work to help uphold those goals. Here is a brief breakdown of each Sub-Committee and how they contribute to the IMO.

Carriage of Cargoes and Containers (CCC)

The primary responsibility of the CCC, as the name suggests, is to help regulate the type of cargo containers. In specific, they help to implement codes, as well as survey and certify that everyone is following regulations surrounding cargo operations and carriages. This can include things like the transportation of packaged dangerous goods, bulk gas cargoes, solid bulk cargoes within containers. The CCC also helps to evaluate any hazards related to pollution or environmental concerns and helps to ensure all parties are in cooperation with the UN, and any other important agencies, like IGOs and NGOs.

Self-explanatory enough, this sub-committee is responsible for the “human side of things”, which can include training and certification of any persons that may need it. The HTW also provides guidance with issues like fatigue or illness, and update and revise IMO model courses.

The III is tasked with matters related to IMO treaty instruments, many of which include the Flag States. For example, they III must review the rights and responsibilities of the Flag States, assess and review the current level of implementation for various IMO instructions by the States, and be able to identify any reasons why there may be difficulties, if any, implementing provisions of current or new IMO instruments.

The NCSR works in liaison with the International Telecommunication Union (ITU) and the International Civil Aviation Organization (ICAO) regarding maritime and aeronautical radiocommunication and search & rescue matters. They also deal with all Government obligations related to the safety of navigation, carriage requirements, and performance standards for shipborne navigation equipment, and operational protocols. Some of which are regarding dangerous situations, collisions, and grounding, voyage planning, and measures recommended for the international maritime search and rescue operations.

As you can imagine, this Sub-Committee is in charge of implementing regulations that help to prevent and reduce pollution of marine environments. This pollution can be related to ships or other vessels, hazardous materials, or harmful aquatic organisms, the latter of which can get into ballast water and sediments and cause damage. The PPR is also responsible for environmentally safe recycling procedures, such as with ships and containers.

The SDC, formerly known as DE, FP, and SLF, helps to enforce all matters regarding, as the name states, the design and construction of maritime vessels, including materials, measurement matters, certifications, and load-lines. This Sub-Committee also helps to ensure the safety of fishermen and their ships.

Like the SDC, the SSE focuses on ship-related matters, in this case, the systems and equipment of the vessels. This can include things like machinery, electrical equipment installations, and the testing (and approval) of new systems. The SSE also implements life-saving appliances, as well as takes regular analyses of incidents and casualties related to a ship’s system or equipment.

The work of the IMO and the UN is extremely important to anyone who works with ocean shipping, but it isn’t always the easiest to comprehend. With over 15 years of experience with global logistics, Promptus LLC can help you understand exactly what all the important PGAs and Alphabet Agencies do and which you should familiarize yourself with. Getting a Licensed Customs Broker on board can also help to ensure you don’t forget any important documentation that might get you in hot water with the IMO, resulting in additional fees or penalties. Contact us at 305-687-1405 today to get a quote for our services!