A Look at Port Congestion at Major Seaports (Causes and Consequences) 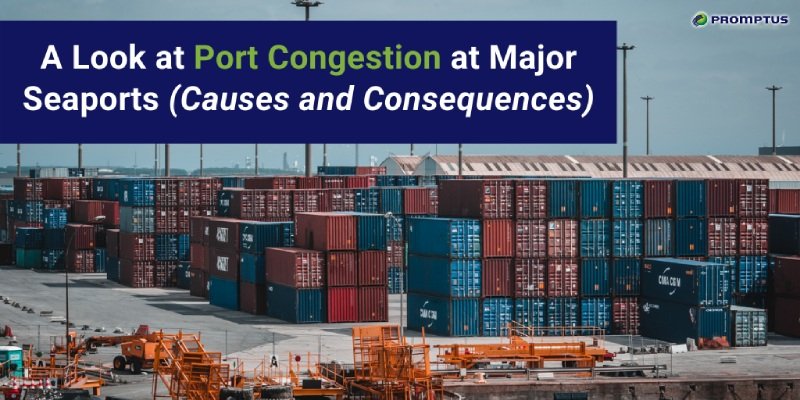 Port congestion is a current reality across many ports of the US. It is estimated that of the 10 nation’s busiest ports at least 7 are facing congestions as a result of the global supply chain disruption caused by the Covid-19 pandemic during the second and third quarters of 2020; affecting manufacturers, retailers, and consumers.

Let’s look at the situation of the main two port complexes to understand the causes of their congestions and the consequences.

The port of Los Angeles/Long Beach began experiencing a surge in imports last August. Port of LA Executive Director Gene Seroka informed in mid-November that loaded imports from October were up 29% over 2019 and they were expecting a 41% increase in the weeks ahead. This volume of cargo is the main reason for the current port congestion. To worsen the situation, Southern California warehouses are at or near capacity. In the same briefing, Seroka said that “containers are accumulating in large numbers with fewer and fewer places to put them”.

The Los Angeles Times reported just days ago “a flotilla of almost a dozen cargo vessels sits anchored south of Los Angeles, waiting for berth space, while around the twin ports of L.A. and Long Beach, shipping containers are already stacked five and six high – the maximum the fire department will allow”.

One of the most critical consequences of this situation is the slow return of equipment to their ports of origin or wherever they are needed to load new cargo. This has created a huge deficit of equipment, especially in Asian ports. In recent days the Port of Los Angeles registered 330,180 TEUs empty, which is more than double the TEUs of loaded exports.

Port of NY and NJ

Continuing its recovery from 2019 volume levels, the Port of New York and New Jersey surpassed its all-time September record as factories and manufacturers around the world increased production in preparation for the holiday season and growing concerns of future supply chain disruptions. The Port reported a total volume of 720,969 TEUs in September 2020, which was a 15.4 percent increase from September 2019 (624,961 TEUs). Although this is good news it creates a big problem in the supply chain because of the port congestion.

This high volume of imports on the East Coast has triggered a heavy container freight backlog at this port. As of Nov. 19th, there was a 6-mile backup of trucks trying to enter the GCT Bayonne facility. Congestion has also been reported at the Port Newark Container Terminal (PNCT).

As reported by the JOC, queues, and congestion at New York-New Jersey tend to worsen after the arrival of large ships that discharge thousands of containers. As a consequence, demurrage fees started being charged on boxes that were not removed before free storage time expired; this is a big problem for trucking companies and drayage dispatchers since drivers do not want to collect equipment that might not be released because of pending fees.

In New York-New Jersey, most terminal demurrage begins at $145/day for the first four days after free-time expiration. Daily fees escalate to $195 per day for the fifth through ninth days and $355 per day after nine days. Demurrage fees for refrigerated containers are higher.
Similar situations are taking place in some other important ports of the nation, such as Houston, Miami, and Savannah.

The ripple effects of port congestions are felt without delay in the economy:

Here at Promptus, we are committed to following good practices to reduce situations that contribute to delays of the cargo at the port. Contact our team should your business need a reliable provider to help you navigate through the hurdles of these challenging times.