Most Important Documents for the Transport of Cargo 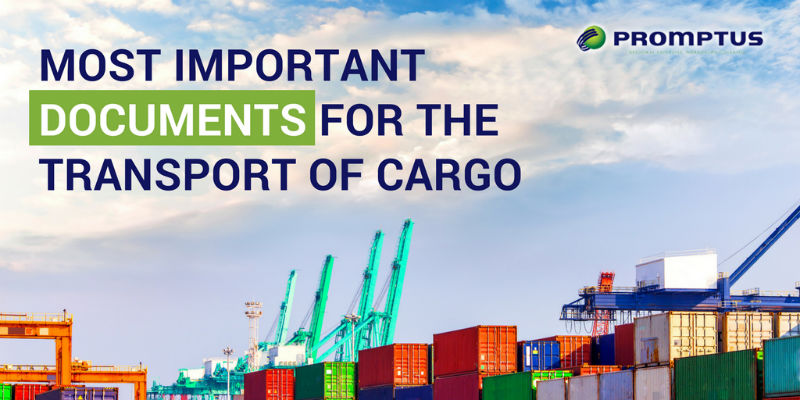 Behind all international import/export transactions are important documents that detail all the information relevant to the parties involved, including the terms of the transport for cargo. One important group of these documents is known as the transport documents. The company organizing the transport, such as a shipping line, air cargo carrier, trucking company, or freight forwarder, typically issues this paperwork.

Types of Documents Required for Transport of Cargo

The bill of lading has always been the key transport document and this might be issued in various forms, depending on the type of transport being used and the scope of the journey.

The general definition of the Bill of Lading is document used by a carrier to a shipper, signed by the captain, agent, or owner of a vessel, furnishing written evidence regarding receipt of the goods (cargo), the conditions on which transportation is made (contract of carriage), and the engagement to deliver foods at the prescribed port of destination to the lawful holder of the bill of lading.

The Bill of Lading is, therefore, both a receipt for merchandise and a contract to deliver it as freight. There are a number of different types of bills of ladings, which we will detail below.

A bill of lading (B/L) is typically a transferable document that serves the following purposes:

However, in the case of a straight bill of lading, the buyer has typically already made their payment in advance of shipment and thus needs a carrier to simply deliver the goods to the consignee. The buyer needs only show proof of their identity to receive the goods. It is also used when goods are shipped on an open account. This type of bill of lading is non-negotiable and non-transferrable; it does not act as the title of the goods, as with traditional bill of ladings.

A Marine/Ocean/Port-to-Port Bill of Lading is specifically designed to cover port-to-port shipments and should be used only when the mode of transportation is strictly ocean shipping.

This paperwork will contain vital information to the transaction that will include details specific to the vessel being used. If the merchandise was received at a port other than the one specified by the buyer, there must be an “on-board” notation indicating the accurate port of loading. These are typically negotiable and can, therefore, be endorsed and transferred to a third party as necessary, even while the goods are still in transit.

This document is very similar to the ocean bill of lading; however, a non-negotiable sea waybill is just that – non-negotiable. Rather than acting as the title for the goods on board, it is simply proof of the transaction and all the encompassing information.

This helps to reduce fraud in transactions and can offer more flexibility for the parties involved. These sea waybills are recommended for shipments between allied companies, goods purchased in advance or with a line of credit, or merchandise that will not be transferred while in transit. Ultimately, there must be a degree of mutual trust before considering this option.

If you plan to use more than one method of transport to ship your goods to their destination, you will need, what is known, as a multimodal bill of lading. However, unlike a traditional B/L, the carrier will take full responsibility for the goods while they are in transit. Normally this document will contain key information such as: Place of Receipt, which may be different from the place of actual loading. Many multimodal bills of ladings will also include the ‘Place of Delivery by On-Carrier’, which might be different from the place of discharge.

Also known as an air waybill, which is a non-negotiable document that indicates the acceptance of the goods for transport. The air waybill must name a consignee (who can be the buyer), and should not be issued ‘to order’ and/or ‘to be endorsed’. Since it is non-negotiable and does not provide evidence title to the goods — in order to maintain some control of the goods not paid for by cash in advance, sellers often consign air shipments to their sales agents, or to freight forwarders agents in the buyer’s country.

Concerned that you may not have all the required paperwork? Our freight forwarding services can ensure that your merchandise travels to its destination safely, whether it is domestic or international. Contact us today at 1-877-776-6799 to get a quote for our services!